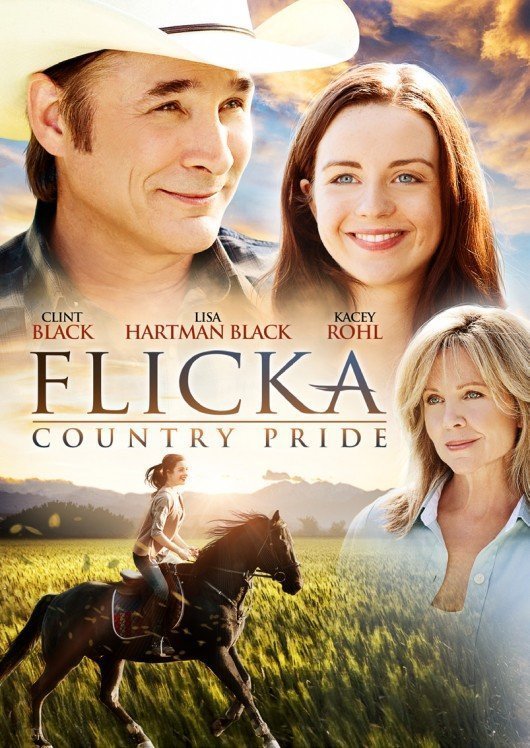 We recently had the pleasure of reviewing the new movie Flicka: Country Pride.

My daughter is currently horse crazy so I knew she would love watching this movie! It was really cute and appropriate for the whole family to sit down and watch.

Here’s some info on the movie itself:

From the pages of Mary O’Hara’s popular novel My Friend Flicka, the year’s most inspiring coming of age story arrives just in time for Mother’s Day when Flicka: Country Pride gallops on to Blu-ray and DVD May 1 from Twentieth Century Fox Home Entertainment. Directed by Michael Damian (Flicka 2, Marley & Me: The Puppy Years), Flicka: Country Pride stars country music superstar Clint Black (Flicka 2), Lisa Hartman Black (“Knots Landing”) and Kacey Rohl (“The Killing”) in a heartwarming adventure for the entire family.
When Toby (Black) takes on a job at a stable with Flicka in tow, the owner’s teenage daughter Kelly (Rohl), quickly bonds with the wild horse. A budding equestrian rider, she hopes to break Flicka for an upcoming competition, despite her mother’s (Hartman Black) disapproval. With the competition approaching, a rival trainer stealing business, and a growing fear they may be forced to sell the stable, Toby steps in to turn things around for Kelly and her mother.
Grammy Award® Winner Clint Black is one of country music’s superstars with over 20 million albums sold worldwide.   Having written over 100+ songs including 23 #1 songs Clint is an active philanthropist overseeing numerous charities.

The Flicka: Country Pride Blu-ray and DVD has two behind-the-scenes featurettes on the making of the film and a never-before-seen music video.  Available at 4,000 Walmart and Sam’s Club locations nationwide and in Canada, both the Blu-ray and DVD are now available for pre-order exclusively at Walmart.com.  Prebook is April 4.

The kids really liked the movie and we did too. I love movies with a really good message and this movie definitely had a great message.

Clint Black is a favorite country artist of mine so seeing him play opposite his real life wife in this movie was pretty neat!

Do you think you’ll purchase Flicka: Country Pride on Blu-Ray or DVD when it comes out?

It comes out just in time for Mother’s Day! Be sure to check out this cute Like Mother Like Daughter Feature they have released to compliment the film as well!

Two Family Friendly Frugality readers will win a copy of Flicka: Country Pride on Blu-Ray or DVD and entering is super simple!

Just leave a message below this post answering the following question:

Were you ever horse crazy? Have you ever ridden a horse or actually personally owned a horse? (If so, be sure to tell us about your horse!)

The winner will be chosen on the release date of May 1st. This way if you don’t win, you can head on over to Walmart or Sam’s Club and purchase your copy the day the movie hits store shelves!

**Be sure to check out this Horse Care Checklist that goes along with the film!

Disclaimer: I was provided with a review copy of Flicka: Country Pride at no cost to myself. I have not been compensated to post this review or giveaway and both giveaway copies are being provided by/will be shipped by Fox Home Entertainment.