You are here: Home / Recipes / Quick and Easy Recipes / Italian Sausage Soup: A Hearty & Wholesome Soup You’ll Love
We may earn a small commission via affiliate links in this post. See disclosure policy and/or privacy policy for more details 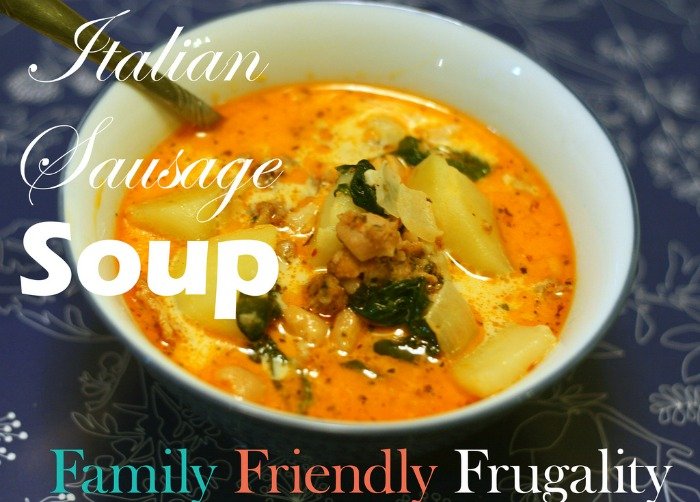 Want to bookmark this recipe? Pin it!

I like my soups hearty with a bit of meat, a bit of veggies and a bit of starch.

This soup has it all.

The best part about this soup? It’s totally a one pot meal!

The second best part about this soup? It includes BACON!

Sold? I thought you would be. 😉

**Note: the original recipe asks for a lot more liquid than my version and also subs in kale for spinach. I like my version better, but feel free to check out the original as well!
***The kids weren’t HUGE fans of this soup. I eyeballed the red pepper flakes and might have put a bit more than 1/4 teaspoon in. It was a bit hot. It was fine for me and my husband, but if you have kiddos eating it, you might want to cut back or just put the red pepper flakes on your individual bowl instead of in the community pot.

This soup was so yummy and comforting and even better the next day!

Check out all the frugal recipes here on Family Friendly Frugality.