You are here: Home / Shopping / Reviews & Giveaways / My Review of The Hunger Games (The Movie): In Theaters TODAY!
We may earn a small commission via affiliate links in this post. See disclosure policy and/or privacy policy for more details 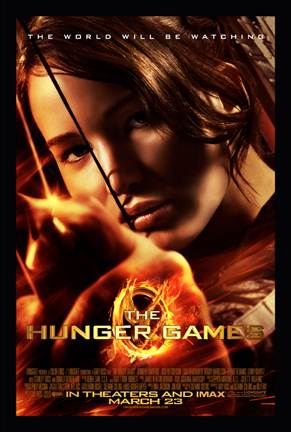 On Wednesday night, we climbed into the car and drove INTO Houston during Rush Hour.

Now, what would motivate 2 otherwise sane adults to take a totally optional trip during rush hour in one of the largest, most traffic congested, cities in the country?

We were invited to a pre-screening of this highly anticipated film, which was adapted from the first book in the wildly popular series penned by Suzanne Collins.

I first read The Hunger Games trilogy (in less than a week. Back to back. Speed reader I am, but this was impressive even for me.) over a year ago.

I remember coming to the end of the first book, NOT knowing it was a trilogy, and having my jaw drop open.

That’s it! That’s how  you are going to leave this?!

Thankfully, a quick check of Amazon.com (please tell me there’s more to this story!) brought me to the 2nd book in the series (what a relief!). No rest for the weary, the end of book 2 left me racing for the third book so I could finish this story that was totally sweeping me away.

Needless to say, I had high hopes for the first movie in the series.

For the past year, I’ve followed as they picked the cast:

As they released the movie logo: 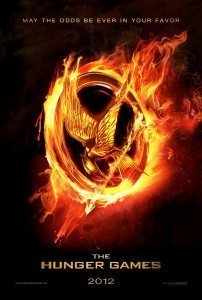 Finally, as they released trailer after trailer, each one giving us a bigger sneak peek of what we could expect.

I found myself anticipating this film so much that even rush hour traffic in Houston couldn’t stop me from making this pre-screening!

I was not disappointed!

Here are my thoughts (I will not include spoilers, but if you want to know NOTHING about the movie, you might want to stop here):

The cast is superb.

I’ll admit that in the books, I wasn’t really a Peeta fan. Well Josh Hutcherson totally changed that for me. I was blown away by how he endeared that character to me.

Jennifer Lawrence is Katniss Everdeen. All Kat has ever known is survival and Jennifer portrays her heart and her strength with grace. Quiet and fiercely protective of those she loves, that is Katniss. Jennifer makes you feel as if the role of Katniss was written just for her. She steps into the shoes of the heroine of the entire series so seamlessly.

Elizabeth Banks and Woody Harrelson, perfect. Effie Trinket is just as outlandish and ridiculous and out of touch with reality in the movie as she is in the books. Elizabeth Banks is barely even recognizable!

Woody Harrleson plays Haymitch a bit more sober than the book describes, but I think this is a good thing. When you adapt a book into a movie, you have a lot less time for character development. Haymitch plays such a big part in Katniss’s time in the Games that they needed to establish him as a drunk quickly and then move on.

The only character/actor that didn’t wow me was Liam Hemsworth as Gale. I can’t quite put my finger on it, but my husband mentioned he just looked a bit too well fed and maybe that’s it? He just didn’t fit. While the other characters seemed to really become their characters, he just seemed to be playing Gale. Disappointing, but Gale doesn’t get too much screen time in this first film. Hopefully he’ll endear himself to me in the subsequent films? We’ll see.

I’ll start off by saying that no, the movie is not better than or even as good as the book. That said, as I stated on Facebook recently, I’ve only ever said a movie was better than a book ONE time, and in that case I saw the movie before reading the book.

I can’t take anything away from the film though. I feel they hit all the high points and they worked around the stuff they couldn’t get to. I know purists might be frustrated by all that was left out, but the movie is quite long and honestly I don’t think they could have fit anything more in it without turning the first book into several movies.

The reaping at the beginning of the movie was powerful. The scene was played perfectly. There were a few things left out (Haymitch is not in the reaping scene at all, or if he is I must have overlooked him), but the contrast between Effie and the District 12 residents is shown so well that you actually feel the discomfort.

The process of “training” the tributes is the only part that kind of lagged for me (I would have rather they spent more time on the Games).  It is an important part because it introduces us to the other tributes, but because I have read the books (slight spoiler here)…I knew not to get too attached to those characters anyway.

The games…wow. You can read it and you know it’s cruel and you know it’s brutal and you know it’s gruesome. Seeing it is a whole different experience though. And YES they do show the violence. They DO show blood. They do show killing. What you read in the books IS shown on screen. It has a PG-13 rating for a reason and I would say that that is the correct rating for this film. Even at 13, I’d say your kids should read the book first before seeing the film.

The games are over quickly, too quickly it seems. I don’t want to give too much away, but when the games are over and you are taken through the motions to get to that last scene…all that anticipation that had naturally gone away as the movie progressed and you found yourself engrossed in the story and the characters comes back with a vengeance!

Just like the books, I walked out of the theater thinking that I can NOT wait for #2.

Yeah, I’ll probably even brave Houston Rush Hour for it if they’ll have me again 😉

*Be sure to enter The Hunger Games giveaway currently on Family Friendly Frugality right now!

Have you seen the film yet? Do you have plans to see the film? I’d love to hear your thoughts !

Disclaimer: I was invited to a pre-screening free of charge to facilitate this review. The opinions are all my own.