You are here: Home / Shopping / Reviews & Giveaways / My Time With – The Last Story (Wii) {Video Game Review}
We may earn a small commission via affiliate links in this post. See disclosure policy and/or privacy policy for more details 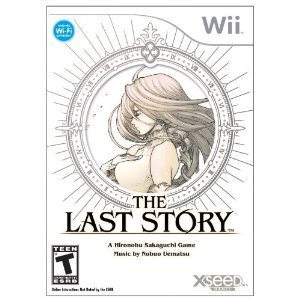 My husband has volunteered to do some Entertainment Reviews for FFF. I hope you enjoy his perspective (as well as his awesome writing!) and that you find it helpful!

The Last Story is the first Wii exclusive RPG developed by the Japanese –based Mistwalker, previously known for their beloved Xbox 360 RPGs Blue Dragon and Lost Odyssey. After over a year and a half of its Japanese release and the incessant demands of a rabid western audience, USA based XSEED Games published the title to bring it stateside.

A JRPG with some welcome, unique gameplay mechanics, this offering from Mistwalker at first appears to tell a rather rote story about a young man seeking to rid the world of evil and gain the respect and power he needs to protect those that he loves. A noble charge certainly, but as the story proceeds the main character, Zael, comes to realize that the path to achieve this dream is far from what he imagined.

You control Zael, a member of a snarky group of mercenaries hired at the outset of the game by the Count of a castle town to rid his island of monsters. Shortly after this mission begins one member of the team is gravely injured, and Zael is mysteriously granted a new power dubbed “Gathering” that can both provoke the attention of the enemy towards him and be used to revive incapacitated allies. This important ability is used in battle to keep enemies attracted to your whereabouts while the magic users in your party cast offensive and defensive spells with impunity, as things can get ugly quick with them out of commission.

From there Zael’s life gets further complicated as he unwittingly meets the Count’s niece, Lady Calista, in the market during an awkward sequence which is pretty much torn out of the script of Aladdin. This unexpected companion accents the party nicely with her healing magic, though Zael faces accusations from her fiancé of willingly putting her in danger, harsh criticism from knights for his mercenary background, and even warnings from Calista herself that the noble life is not what it seems. Thus begins Zael’s voyage towards finding the tools to protect those around him in unlikely places, whereas even the capacity for such virtues can be absent where it should be abundant.

How does it work?

It’s apparent almost from the beginning that The Last Story breaks a lot of conventions for its genre. For starters, it has a cover system (because RPGs needed one, right?). You can hide behind walls or waist-high obstacles and wait to catch approaching enemies off guard, or fire arrows from your crossbow at distant enemies if they’re attacking at range or if you want to lure individual enemies to draw them out of a group. Typically this is completely optional however. For the most part you’ll find yourself going toe-to-toe, sword in hand against legions of enemies.

That brings me to basic combat, which is also out of left field. The action follows a third person camera behind Zael as you freely move about the battlefield and choose who to attack, but attacking is merely the result of running up to an enemy and holding the joystick in their direction. You can hold Z to guard but by default you need only move the joystick in the direction of an enemy to pummel them with a flurry of sword strikes. If this is unappealing there is a setting to force manual attacking with a button press. I didn’t find the default setting troublesome for long but there were rare occasions where getting partially surrounded is a problem, as the game can think you’re trying to attack when you’re simply trying to run around an enemy.

Probably the strangest moments are those where the player is forced into a first-person perspective to look around the environment for something in particular. For some reason these segments rely on the joystick to shift your perspective rather than utilizing the Wii’s remote and infrared sensor as you might expect. Aiming around the battlefield to fire arrows, check for enemy weaknesses, and inspect for destructible points in the environment work the same way and it all functions fine, it just makes me wonder why. Conversely there are moments where you need to rapidly move the joystick to get out of a grapple hold or some other such nuisance, which actually made me long to waggle the Wii remote instead as it might be less frustrating.

After a few hours new game mechanics are introduced to make things more interesting. Your magic casters create colored rings on the battlefield which you’re able to interact with either by standing in them (to be healed or to imbue your weapon with a magical element for example), or use a special command called “Gale” to amplify their effects, which can include immediately healing your entire party or severely reducing the defensive capabilities of a boss. In Chapter 10 a new meter is added to the interface that, when full, allows you to pause the battle and go into “Command Mode”, in which the camera shifts to an overhead perspective allowing you to issue specific orders to your teammates. This includes what abilities the melee focused characters should use, what spells the magic focused characters should cast and where, and who should retreat from a dangerous predicament. It’s a fun system to experiment with even if it lacks the developmental and customizable sophistication of something like Dragon’s Age.

The game features a modest variety of loot that you can equip on each party member including weapons (two of the characters can dual-wield) and two pieces of body armor. Often you’ll find items on the ground after a battle or in chests that show up as a question mark. When you approach them a quick slot-machine-esque effect will play out as the game decides, depending on where you are in the story, what item it should randomly choose to grant you with. When you’re not on an important quest you can visit the town’s Arena for some quick cash to spend on upgrading or purchasing new equipment at the local shops, though the experience rewards were dismal in my experience. In some areas however you’ll come across “Summon points” on the ground which you can repeatedly use to call down a group of enemies and slay them for much better results, allowing you to gain levels quickly before a boss fight if you feel underpowered.

Visually speaking, The Last Story sadly fails to impress for a few hours. If you can make it past the incredibly drab looking opening dungeon you’re not far from seeing some inspired art design. However, throughout the experience you’ll often find yourself in dark environments that will make you want to adjust your screen’s brightness, and many of the textures can be muddy enough to make you think you’re playing a Silent Hill game. It doesn’t help either that a lot of the enemy design is lacking, though there are some interesting bosses that stand out.

Anything else I should know?

The Last Story is rated T (Teen) by the ESRB and is only available on the Nintendo Wii.

Outside of some infrequent alcoholic references and crude humor, I don’t feel that one must abide to the Teen rating so strictly in this case, or at the least don’t wonder whether it’s inappropriate for a young teenager. The violence is cartoonish enough in the sense that there’s a complete lack of blood and offensive imagery. The story beats of light romance, betrayal, personal discovery and valor can hold an important lesson to a budding youngster as Zael’s naïve outlook is peeled away over the course of The Last Story’s plot. For an older audience I won’t say that the themes and events are cringe-inducing exactly (there’s a bit more maturity to the execution than you’ll find in most JRPGs in fact) but I would recommend jumping in here if you find the game mechanics interesting rather than to anticipate an enthralling story experience.

There’s a multiplayer mode I neglected to try, though it appears to allow for connecting to other random players or to your friends using Wii Friend Codes and offer competitive Free-For-All bouts or cooperative Boss Rush modes. This could add some value to your experience unless you want to replay the story to tackle some optional side quests you missed or to obtain some of the best equipment which can be elusive.

The Last Story is a curious product. It’s odd to look at it as a kind of “last hurrah” for the Wii since it eschews all manner of the system’s most notable feature, motion controls. Then again, that may make it a perfect bridge to Nintendo’s new Wii U console this fall which seems to place less emphasis on the feature. In fact the Wii U’s tablet controller might have been perfect for displaying the Command Mode interface so perhaps a sequel, or at least a spiritual successor, is in order?

Regardless, despite some occasional problems I had with the presentation The Last Story offers a unique experience that is worth a look.

Disclosure: No one was compensated to write this review. We rented the video game from Gamefly to facilitate this review (Use Coupon Code TENDAY To Start Your 10-day Free Trial Today To GameFly!

). All opinions are my own. This post does contain affiliate links.