You are here: Home / Recipes / Spinach & Artichoke Dip Recipe: Make It Better At Home!
We may earn a small commission via affiliate links in this post. See disclosure policy and/or privacy policy for more details 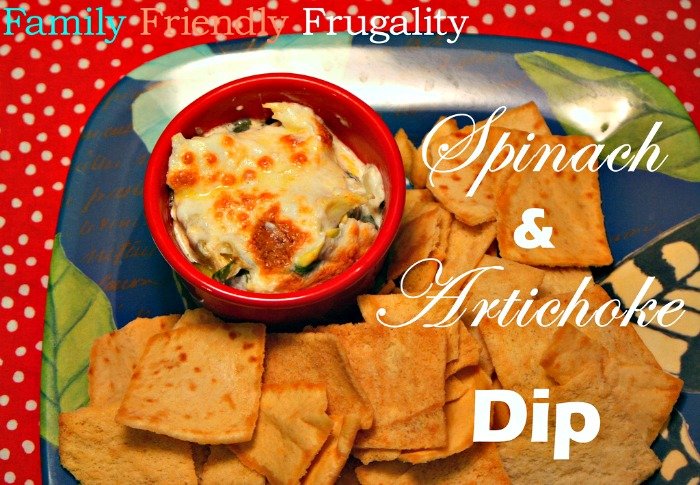 Want to bookmark this to make later? Pin it on Pinterest!

I’m a girl that likes to order an appetizer when we go out to eat.

Well, I’m a pretty decent baker, and it’s rare that a restaurant has a dessert that I feel I couldn’t easily recreate at home.

Appetizers however, well even if I could recreate them, what’s the point?

If I’m at home, and I’m doing the cooking, there is no real reason not to just jump straight to dinner. Making an appetizer (other than a salad) seems like a lot of unnecessary work.

Recently though, I was perusing Pinterest and saw a yummy recipe for Spinach & Artichoke dip.

Now, I’ll admit, if Spinach & Artichoke dip is an appetizer selection where we are dining,  it’s pretty much a guarantee I’ll order it.

Maybe I convince myself it’s the healthiest option.

I mean it has TWO vegetables in it!

Tortilla Chips & Queso? None (unless you count the small bits of onion and peppers in the queso…I don’t!)

Who cares about all the cheese and the inevitable stack of chips or pita bread you use as a transportation device between the plate and your mouth.

This version you can make at home is just as good as the restaurant kind  (if not better), and it makes a TON. Tastes really good reheated too!

Disclaimer: This probably isn’t very healthy. But, I repeat…TWO vegetables. I’m pretty sure that counts for something.

Check out all the frugal recipes available on Family Friendly Frugality