You are here: Home / Shopping / Reviews & Giveaways / The Descendants Review: Must See or Must Miss?
We may earn a small commission via affiliate links in this post. See disclosure policy and/or privacy policy for more details 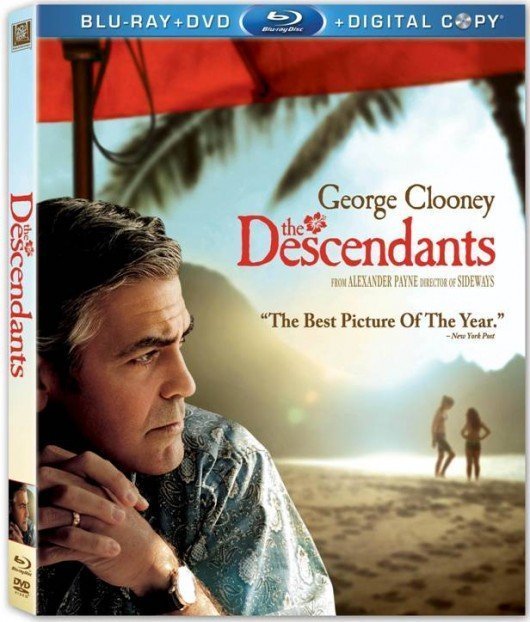 I received an advance copy of the movie The Descendants. I remembered seeing the previews for this movie not long ago and thinking it looked good.

The movie stars George Clooney as a dad of two who is in danger of losing his wife. The movie opens with his wife water skiing and apparently she has an accident that lands her in the hospital in a coma.

As if this wasn’t bad enough, George Clooney’s character is also in charge of making a huge decision on a piece of land his family owns. What he ultimately decides to do with this land is not only of importance to his large and extended family, it’s also huge for the entire state of Hawaii (where the entire movie is set).

Without giving too much of the movie away, at some point George Clooney learns that his wife has betrayed him terribly.

The movie is essentially about him dealing with all of these issues and trying to be the dad he always struggled to be before his wife had her accident.

The Descendants Review – About the Movie

From director Alexander Payne creator of the Oscar® winning Sideways comes one of the Best Pictures of the year, THE DESCENDANTS, featuring a stunning cast including Best Actor nominee George Clooney (Ides of March) and Shailene Woodley (The Secret Life of the American Teenager) in her Golden Globe nominated and Independent Spirit Award winning role. Take home this wonderfully warm and witty film and go behind the scenes of THE DESCENDANTS with all-new exclusive content on Blu-ray Disc Combo Pack and DVD March 13 from Fox Searchlight and Twentieth Century Fox Home Entertainment.

Based on the best-selling novel by Kaui Hart Hemmings and set in Hawaii, THE DESCENDANTS is a sometimes humorous, sometimes tragic journey for Matt King (George Clooney) an indifferent husband and father of two girls, who is forced to re-examine his past and embrace his future when his wife suffers a boating accident off of Waikiki.  The event leads to a rapprochement with his young daughters while Matt wrestles with a decision to sell the family’s land handed down from Hawaiian royalty and missionaries.

Nominated for five Academy Awards® and winner for Best Adapted Screenplay, THE DESCENDANTS is a must-have on Blu-ray and DVD.  The release is packed with must-see deleted scenes, behind the scenes extras and exclusive featurettes to bring you even further into the story.

My The Descendants Review:

We really liked this film. There were parts of it that were incredibly difficult to watch for personal reasons. If you’ve ever sat bedside with a loved one in a coma, you know the worry and the fear and frustration that sets in as the days stretch by. That’s not easy to watch in real life, and it’s not any easier to watch in a movie. Little things, like placing towels in her hands because she’s clenching her fists, can really hit you since they are so true to life.

George Clooney and Shailene Woodley do an incredible job acting side by side as the grieving father and daughter. You really feel like George Clooney is just a dad who lost his way. He wants to do right by his children and his wife, but he’s constantly confronted by the ghosts of his marriage’s past.

I can’t say this is a feel good movie, and it’s most definitely not a family movie (there is profanity). It is a good movie though and very worthy of the accolades it has received. I’d say it’s my favorite George Clooney movie thus far.

I would say this is a must see for adults. It is rated R.

You can purchase the Blu-ray Combo Pack and DVD at any retailer that sells movies (Amazon, Walmart, Target, etc).

The Descendants Review- Disclaimer: I was provided with a copy of this film to facilitate my review. I received no other compensation. All opinions are my own.

Previous Post: « St. Patrick's Day Sales! Save with Old Navy and Gap Promo Codes!
Next Post: My CVS Goodie Basket – Check This Out! »