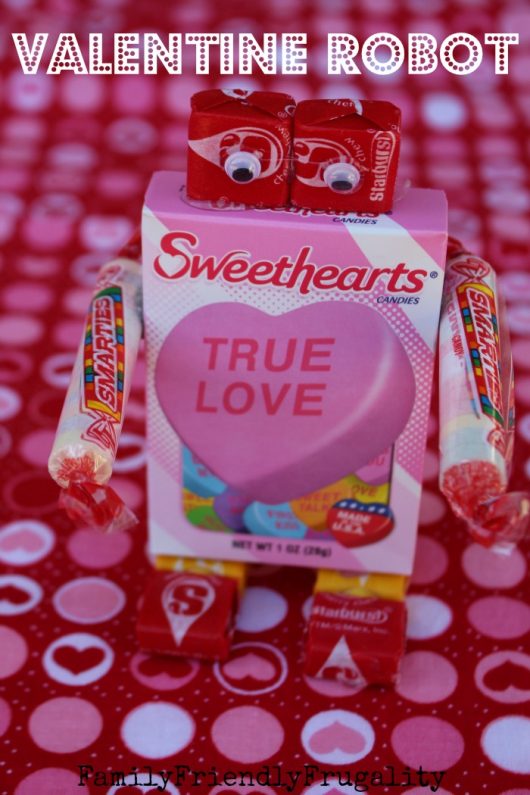 I was perusing Pinterest one day and I saw the cutest little Valentine’s Day Robot!

I pinned it and abruptly forgot about it until one day when I was in the Dollar Tree.

I was in the Valentine’s Day candy aisle and all of the “ingredients” for this craft were right next to each other!

This is actually super simple and somewhat self explanatory by looking at the picture.

You just need a box of Sweethearts, Smarties, Starburst, a hot glue gun and some googly eyes!

First off, go ahead and fill out the “To” and “From” on the back of the box.

Step 1: Glue 6 Starbursts together in sets of 2

Step 2: Glue Googly Eyes on the front of 1 set of the glued together Starburst

Step 3: Glue that set of Starburst on to the top of the Sweethearts box

Step 4: Glue the other 2 sets of Starbursts on the bottom of the box as feet.

Step 5: Glue the Smarties as “arms” on either side of the box.

Pass out to your friends! So super cute!

*TIP* When you glue the Starburst, turn the square so that you are putting the glue on the side without the fold. Mainly so you don’t have to worry about the glue seeping into the cracks and getting on the candy.

This would be a fun classroom project with liquid glue, but you would need to allow time for the glue to dry. This would NOT be a good glue stick project though. 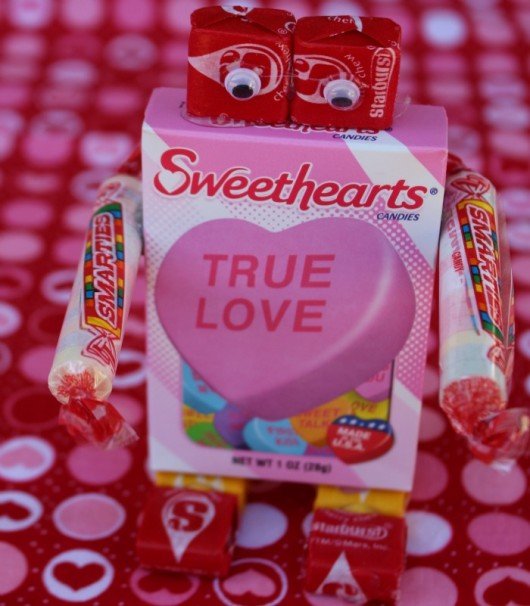