You are here: Home / Recipes / Ninja Foodi Recipes – A Quick Glance at My Favorite Ninja Foodi Recipes!
We may earn a small commission via affiliate links in this post. See disclosure policy and/or privacy policy for more details 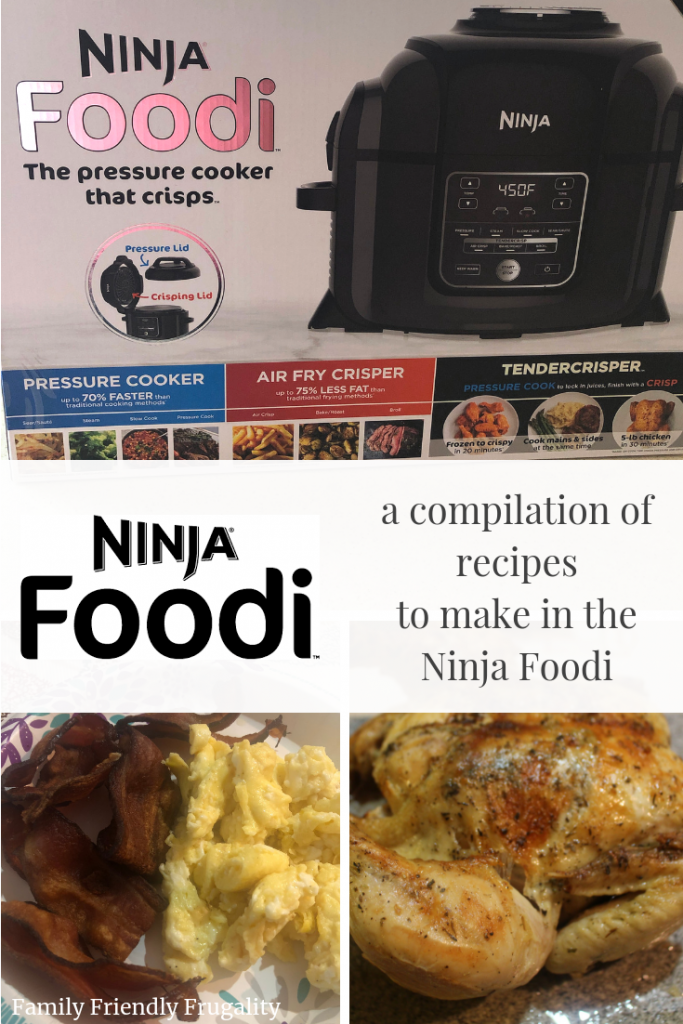 I received a Ninja Foodi for Christmas. Actually, I received a different air fryer, but when I read the online reviews (coupled with a facebook post I read the night before I received it, regarding the unit catching on fire while UNPLUGGED) I was hesitant to keep this particular model in my house.

I had been wanting a Ninja Foodi since the very first video I saw of it over the summer. That price point though…ouch!

Thankfully, with the funds from the returned air fryer AND some Christmas money, I was able to procure my very own Ninja Foodi!

So far, we have made a long list of items:

I already have an Instant Pot, so honestly I was more interested in the Ninja Foodi for the air frying feature and because I would need more fingers and toes to count how many times I have wished I had a second pressure cooker!

So far, it has not disappointed me!

I wanted to create a post to share some of the tried/true Ninja Foodi recipes that I have been able to use the Ninja Foodi for.

I did not want to do separate posts for all the recipes (because it seems silly to write an entire post about how to cook frozen mozzarella sticks in an air fryer), but still wanted a one stop shop for anyone specifically looking for Ninja Foodi Recipes, even if they are as simple as how long to air fry a pound of frozen french fries.

(However, as I do post Ninja Foodi recipes you will find them here) 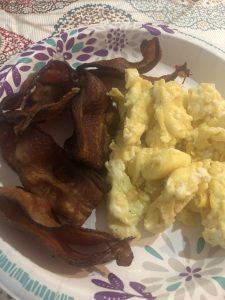 First up is bacon! My first time making bacon in the air fryer, I cut the bacon in half before putting the slices on the included rack. The next time, I did not, trusting that the bacon would shrink up before it burnt on the bottom. It was a success!

I air fried the bacon on the included wire rack for 12 minutes. This resulted in very crispy bacon. I will play with less time and update! 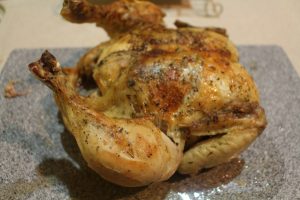 I made this according to the Foodi directions in the book included with your Foodi. My chicken was a bit bigger though and was not fully cooked unfortunately. Next time I will cook pressure cook 5 minutes per pound as I have seen suggested elsewhere and then air fry until crispy. I will update with my results! 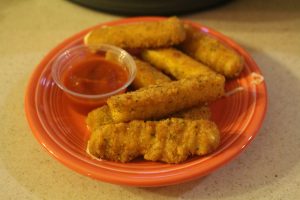 370 for 7 minutes. Check these often and if the cheese starts leaking out, you are ready! I flipped these 1/2 way. They were beautiful and tasty! I did these in the air fry basket.

350 for 5 minutes. I did not flip these. I otherwise made these according to package directions. Keep an eye on them! They crisp up quickly and beautifully. I did these in the air fry basket.

Bacon made as noted above. Then removed and placed on a paper towel. Poured out all but a teaspoon of bacon grease and scrambled up 4 eggs on med/hi saute mode! So tasty and only messed up one pot!

Hot dogs however…oh my gosh! 6 minutes at 390 degrees in the air fryer basket.

Basically the reason people get air fryers, amiright? These were amazing! We bought the Fast Food Ore Ida French Fries. They were super tasty!

We just followed the time/temperature setting in the included Ninja Foodi cookbook and these were perfect.

I have this on here as a place holder. These did not turn out great. Some parts way too crispy, some parts way too hard. Not a fan. Will keep trying though as brussels sprouts are basically my fave cooked veggie!

This was actually the very first thing I made in my Foodi since I had not yet gone grocery shopping. My dino chicken nuggets were likely even a bit freezer burnt since they had been in my deep freezer for so long.

They were great though!

400 degrees for 9 minutes and they were perfectly crispy and tasty. Made in the air fryer basket.

In addition, any of my Instant Pot recipes can be adapted for the Ninja Foodi by using the same exact instructions!