***I changed the dates on the posts so they would appear in chronological order rather than newest to oldest. In case you are wondering why I would tell the story backwards based on the date stamps on the posts!*** 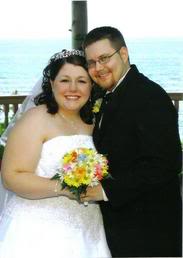 My name is Heather and I am the woman behind Family Friendly Frugality. However, I’m backed by a pretty fantastic family who supports me in everything I do.
I thought you might be interested in the family behind the blog, so I thought it was time to write out our story. This isn’t an about me. It’s an about us (hint: this means it is going to be long! I’ve separated it into a series of posts which I’ll post over the next few days)
I’ll spare you the growing up stories…parts of them are painful and in the interest and respect of our family and loved ones, it’s not something we’re going to discuss on our public blog. I was born in NY. Moved to NJ soon after. After my mother died in 1995, I moved to Texas with my dad and stepmom. I have 2 stepbrothers, 2 stepsisters, a half sister and 2 biological sisters (one deceased). I live close to the majority of my family still, except for some extended family in NY/NJ.
Colin was born in Oregon, lived in Arkansas and Florida before moving to Texas. He has an older brother and a younger sister. His mom lives close by and his dad lives in FL.
Okay, so that explains how-we-both-got-to-Texas-in-60-seconds.

Oddly, we worked together for 3 ½ years at a customer service center before we ever even laid eyes on each other. Colin first came on my radar when a friend of mine asked him for advice on a school project (college) we were working on. It was a video project for a movie class we were taking and she had asked him for ideas. His mother owned (still owns) her own videography business and she thought he could give us some good input. She forwarded me his ideas and my first thought was “wow this guy is a really great writer” my second thought was “wow he’s really funny too!”.
I bugged my friend about him a bit, and I think that’s what compelled her to invite him to a party she had one night. I was there, and I felt incredibly out of place. I went through a “wild phase” for awhile, and this was in the midst of that time in my life. Only, my “wild phase” wasn’t so wild, and I totally didn’t fit in at that party.
Enter Colin.

The moment I saw him, I blushed. I remember it vividly (and in fact I’m blushing right now as I’m remembering!). He was wearing a baseball cap and he had piercing blue eyes. He was cute, he was funny and in a crowd that I didn’t fit in with…he made me feel comfortable.

It started with him emailing me at work.  We emailed back and forth for weeks. We didn’t see each other after that night for weeks (and yes we still worked together! It was a big company) Finally one night I convinced my friend to call him and invite him out with us again. That was the night of our first kiss.
From then on, we were pretty inseparable. Every Monday morning he would bring me a bagel and sprite and sit it on my desk. He was the sweetest, most attentive boyfriend I had ever had…and that concerned me.
You see up until I met him, I had only dated jerks. Mean boys who treated me very badly. I knew Colin had never had a girlfriend before and I knew if I continued to date him, I would marry him.
At that point in my life, the thought of marrying anyone was terrifying.
So I broke up with him.
(to be continued)